No Response to a Poem is a Good Response

No Response Is a Response

Someone recently passed on some advice I found interesting because it linked back to similar advice. It was ‘No response is a response’, and I’ve been thinking about this.

Is doing nothing the same as doing something?

By not responding are you saying something and what is it you’re saying? By saying nothing about a poem, you’re saying what: it’s incomprehensible, it’s too deep, I can’t put it into words, I can’t be bothered talking to you, I’m ignorant and so on? Is that it?

Believe me, if a poem was too deep, someone would let you know, unless they felt inadequate, or unqualified to say, or something along those lines. Only they know.

In other words, it’s absolutely true, no response is a response, especially when there’s absolutely no excuse for saying nothing, unless you’ve nothing good to say, unless you’ve been unfollowed and the algorithm ranks you below pondlife, unless you don’t have time. OK. There are plenty of excuses for not responding. I do it all the time. A ‘Seen it have not got time’ ✅ would be good.

If you believe you and your work has been excommunicated by social media, then you may as well enjoy talking to the ether. Poets did it for centuries, so what the hell. In creative writing, the silent response is THE positive ideal I’ve stuck with since my MA.

No response is a GOOD response

Actually, my mantra is, ‘No response is a GOOD response’, which is positive and there are very good reasons for believing this. Silence on social media can always be interpreted as some form of approval, especially if you think you’ve been excommunicated, and why not? Who’d want to be part of a tribe of insecure frenemies anyway? Walk alone, poets. We did it for centuries anyway.

Hate is much more easy to dish out, and if people can they will. So, you write a great poem, post it and no one is offended. Great. Write another. A binary response is ultimately meaningless to humans, and they’re the people who matter.

In real life, such as workshops, classrooms, prize-givings, festivals and readings, flesh and blood trolls are ten a penny. I’ve experienced more direct attacks in person than I have on the internet. Maybe I’m not trying hard enough on the internet, and internet bullies do specialise in far more effective ways of destroying the innocent (cf Australia’s limit on the Like button), but really, the internet is a great place.

It would be great if I could speak properly

In real life, work that drew negative responses has continued to do well since it won prizes, and this is why I love the internet and social media. A silent response is golden because of the things I’ve been told to my face. For example, after reading my poem Like Strangers to a crowded hall and the poet Selima Hill at the Yorkshire Poetry prizegiving event, someone came up to me and said, ‘It would be great if you could speak properly’, or words to that effect. I may be suffering false narrative with the exact words, but even if I am, that was the gist of it. I’ve many more examples regarding my north-west English accent and the elocution police, but one reason I like the internet – no one can judge you on your voice alone.

On another occasion, after reading my poem at the launch of an anthology, someone sent their child over to tell me my poem was depressing. I loved that response, but it certainly wasn’t meant well. No. Not at all. It was meant to crush me. Of course it’s depressing. But only mildly so. So run along, sit with your mum and be a pain in the arse for the rest of your life. That’s depressing.

Why write about that?

In my interview for a place on the MA at Bath Spa University, in response to my poem BND 432Y, the interviewer said, ‘Why write about that?’ He asked this three times in three different ways until I finally said something like, ‘Because I felt like it’. I still got a place, but chose Goldsmith’s instead. That poem’s still around and as relevant now with its environmental theme of transport and social mobility. Returning to it now when preparing my collection What You Will See, it seems woefully short, as though as soon as I establish direction and velocity, I turn off the motorway and park up and give the horn a mild toot of disapproval. It’s faintly weak and defeatist, but shows promise. 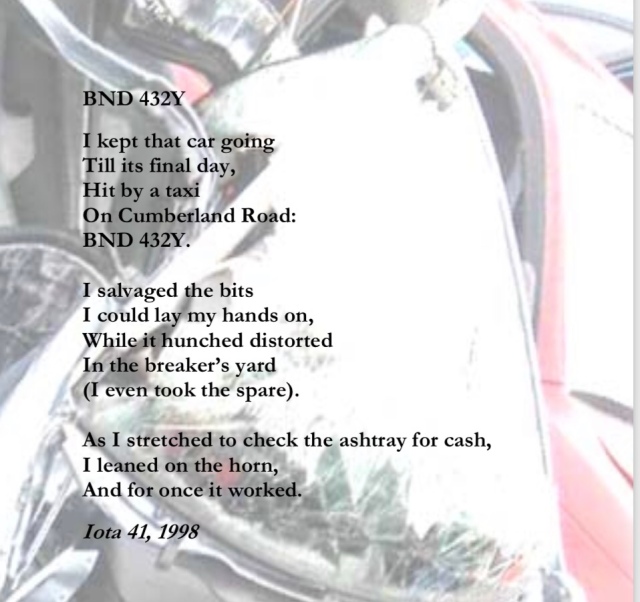 The line of questioning at Bath Spa brought out a lack of confidence people have in my work that may well be snobbery, or inverted snobbery, or ignorance, or all three, and it certainly did nothing positive for me.

For some time afterwards, it seemed incongruous that I should write poetry at all, poetry being the lofty occupation of the idle middle classes, and it still does seem like that, although now, seeing my poems are still relevant and seeing other poets from that era, Armitage, O’Brien etc. coming to the fore, I feel people should be more confident about what I’ve achieved. Education and writing credits are forever. Bad responses fade. Silence is enduring.