Kick back. Take a deep breath. It’s Q&A time. Welcome to the blog and Facebook page of Crooked Cat’s Cy Forrest answering questions from his studio in a rural village just south of Bath. His major new novel The Punished is due out on September 13. Join in the live online Facebook launch event and enjoy the book trailer.

Can you explain who this woman is, Cy?

She was Gabby Holyoak. The whole Tyneham thing really got going when I acquired Gabby Holyoak’s old photos after she died in 2011. I couldn’t believe what I was seeing. Photos of the WAAF (Women’s Auxiliary Air Force) in the newly occupied village absolutely amazed me. Photos of ranks of uniformed women were interspersed with snaps of Gabby and her colleagues in the front line on the south coast of England in the carnage of world war two.

So, I started to dig deeper. For the eighteen-year-old Gabby, December 1943 would have been the fifth gruelling Christmas at war and all she would have known, yet these apparently playful photos of a dire wartime summer were full of optimism and defiance.

In each beach shot, Gabby would be enjoying a day on the beach despite anti-tank traps and destruction all round. The swimsuits are a subject in themselves cf “Esther Williams, Lynn Bari, Evelyn Keyes and Jean Parker”.

They appear to be having a fantastic time, but this was most-likely a one-off event because they weren’t allowed on any beaches and they were warned off with threats of mines, snipers, enemy spies, U-boats and even attacks from the air.

Tyneham was an isolated rural outpost facing the Panzer divisions across the short stretch of English Channel over seventy years ago. Five years at war didn’t improve matters. Gabby and the radar operators lived out of Tyneham manor where eight watches of five women endured winter. Times were tough and when you look into the eyes of the women in the photos, you see they’re just kids with no idea how the war would end.

So, I was inspired by these images and by the WAAF women generally to write The Punished, an optimistic piece of fiction about how the occupation of Tyneham might have shaped four lives. It was difficult to stay positive. The young women faced a lot of terrible hurdles that I couldn’t possibly gloss over. Gabby joined the WAAF because her father would only spend money educating her feckless brother. For her, the WAAF was a second chance and the product of a wartime recruitment drive called for in the influential and popular 1942 Beveridge Report that led to the creation of the welfare state and the NHS in 1945.

Beveridge wanted to lift wartime morale by promising rewards for everyone and Churchill knew it made sense. “Victory would be worth it”, said Beveridge, and he offered women a comprehensive state education for the first time. Britain was, at last, moving into the 20th century. WAAF training was a fantastic opportunity for many women to change their lives forever. Consequently, there was plenty of opposition. For example, Hansard online shows there was appalling criticism of the training in the House of Lords:

Lord Winster, June 1943 vol 127 cc882-6: “The [WAAF] courses include the historical development of the nineteenth and twentieth centuries, art, literature and music, and I confess that I am unable to see the bearing of any of these subjects upon the objects of the school which I have just read out. I will omit many things which I had thought of saying on this subject, and really I have no wish to drive the matter into the earth for I agree that all work and no play makes Jill a dull girl. But I think that many of us know that those connected with such establishments as this are rather inclined to let their enthusiasms take charge of them in matters where welfare, culture and uplift are concerned.”

There are no words. 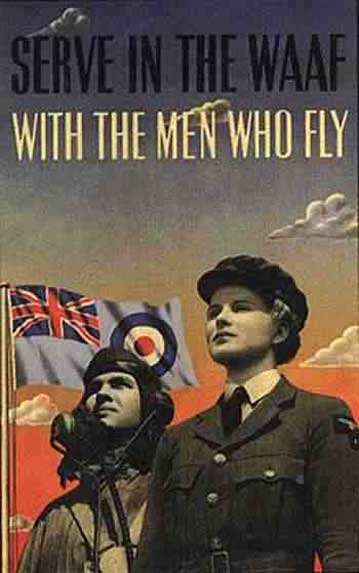 This beautiful WAAF recruitment poster is one of my favourites. It’s the 1943 one that Gabby and all women would have seen. The man is ready to fly, but the woman is smart and to the fore. She’s not draped half-naked in a national flag, for example, and she’s not portrayed as an anatomically precise idealised form. It’s all about her being in control of her own destiny. It’s an empowering propaganda image in the style of Ingrid Bergman in Hollywood and its message is essential to the war against fascism.

The national government, however, didn’t go as far as allowing women to fly, sadly, although a few women did fly. No woman went into aerial combat, although women were considered tough enough to be sent to front line duties in Tyneham, and some were recruited to dangerous undercover work in occupied France with the Special Operations Executive. Generally, it was a dangerous occupation to be a WAAF and attacks on new recruits were frequent in training camps from the start. I imagine, as happens today, sly newspaper innuendo over WAAF sex education fuelled these drunken attacks.

The propaganda efforts lifted women above all of this, though. The joint government knew that inclusion of women was crucial to victory. It allowed Britain to promote images of a country pulling together against fascism and helping save itself. Winning support of the American people, who would be paying dearly for liberating Europe, was essential.

It is sad looking at old black and white photos like these. The young women pictured here did grow old and die, but their struggle and its legacy lives on. I enjoyed writing a novel about the WAAF in the occupied village of Tyneham where 255 men women and children were ejected from their homes with no notice. The poor ill-educated tenants of Tyneham where the only school shut in 1932 owed everything to the ruling Bond family, yet the incoming radar operators were in control of their own destiny. But that’s history, as Mary Beard said recently: “There are none so blind as those who will not look at history.”

You can look at the opening pages of my novel here on Amazon.