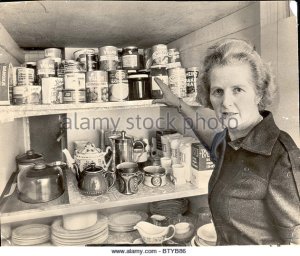 Hearing the shocking news (irony alert) that Unilever is forcing Marmite off Tesco’s shelves in a row over rising costs following the disastrous EU referendum result, I was reminded of the rise of Margaret Thatcher, the grocer’s daughter and “prudent housewife”.

Her notorious and well-publicised 1974 food hoarding scandal ran and ran and did a lot for her cause. Britain had just joined the EU under the Conservatives, and rampant food inflation (17% in 1974) was to become something few can remember today, no thanks to her.

Although the Marmite shortage is being made fun of in the British media (pushing killer clowns off the front page at last), it’s potentially dangerous. Margaret Thatcher’s populism helped her move on to destroy British industry and thousands of jobs with her not-so-prudent slash and burn economics.

PS I apologise for the stock photo. I would buy it from Alamy, but I can’t even find it on their site. I’m amazed this image isn’t all over the internet because it was an enduring image of the rise of Thatcher. I can’t even find a news clip on YouTube. This, and her infamous free milk “snatching”, were central to her rise to power.

From the Margaret Thatcher Foundation archives:

Prudent to save tins—Mrs. Thatcher

Mrs. Thatcher—a likely contender for the Conservative leadership if Mr. Heath seeks re-election—was unwilling earlier to talk about her hoard of groceries.

During the recording of a TV interview at Conservative party headquarters she said: “I don’t want to discuss it.” But later she said her stockpile was “no more than prudent housekeeping.”

“It just so happens that I put away tinned food—whereas others do similar things with deep freezes. I have never heard anyone suggest that storing large quantities of food in the average household deep freeze is wrong.

“The row came about because I was asked by a magazine specialising in retirement problems to give some advice on how to cope with them.

“I said that when one faces retirement one also faces a severe drop in income in most cases, and therefore during the last years of working it was not a bad idea to build up quite a supply of tinned food and other articles likely to be needed in retirement—such as blankets and towels, as a hedge against inflation.”

But in the Commons Mr. Dennis Skinner (Lab., Bolsover) accused her of “filching little tins of salmon from supermarkets and taking them out of the pensioners’ mouths.” [fo 1] (2) Sun, 29 November 1974

Shadow Minister Margaret Thatcher hit back at charges of food hoarding last night and said: “I am just being prudent.”

The Tories’ leading lady, who is now a contender for Ted Heath’s job, added: “All I have done is give some advice on good housekeeping.”

A storm of protest broke out yesterday after Mrs Thatcher disclosed in a magazine that she had built up a store of food to beat inflation.

Tins of ham, tongue, fish and jars of fruit, jams, marmalade, coffee—and bags of sugar—had gone into her two larders.

One was her regular store, the other for “long-term” purposes.

Consumer organisations swiftly condemned her for acting in a way which created unnecessary shortages.

But last night Mrs Thatcher said: “This article was in a magazine for people who are about to retire—telling them what they could do to help make ends meet.

“People often face a severe drop in income on retirement and, therefore, during the last few years of work, it is not a bad idea to build up a store

“That is simply prudent housewifery.”

She rejected allegations that she had done anything to worsen the sugar shortage.

“I have just five bags of sugar,” she said.

He said: “The price of canned food—fruit, salmon, and so on—will go up double as soon as present stocks run out. I think Mrs Thatcher is very sensible.

Tory leader Mr Heath asked his housekeeper yesterday morning to check what cans he had in store—she found there was virtually nothing.

A Chemistry lecturer at Birmingham said last night that Mrs Thatcher’s stockpile could be dangerous to her health.

Dr Robert Stephens said acid in some typts of tinned fruit can react with metal and raise the lead level of the contents.”