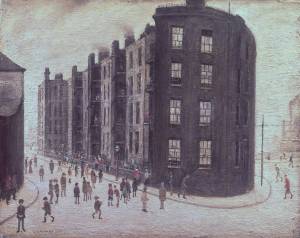 Tate Britain’s Lowry and the Painting of Modern Life wrestled the well-known matchstick men out of the comfort zone of the provincial, conservative art lover into a harsher contemporary modernist light, full of relentless ruin, violence, destitution, debt, alienation and exploitation.

There’s no sign of people working in Lowry’s vision of the natural order of things. You never go in the factories, nor do you go in the houses. Life, pre-TV, happens on the street on well-trodden white earth.

It really is completely overwhelming, and once you’ve seen The Removal, and the Cripples, people knowing their places at the edge of society, you see a vision of Iain Duncan Smith’s benefit cap.

Lowry too, had no optimism for the future. His devil will always take the hindmost.

Put into the “the battle of life” art genre context alongside Vincent van Gogh, Camille Pissarro, Georges Seurat and Maurice Utrillo, he is the unswerving documenter of an era that some still regard fondly as the Golden Age before the Labour government of ’45. And here is where Lowry comes unstuck.

Lowry was a rent collector with a huge ambition and a non-judgemental eye. He told it like it is, but he never suggested change. This is the danger with artists who never suggest a future beyond their own success. Once they have the success they crave, they turn in the breeze like sunflowers.

Lowry condemned the Labour government of ’45 for making the working class less identifiable as a mass. It had been very convenient for him. He’d been able to draw them fighting, staring, being unemployed and generally standing in line waiting for something better to come along. But the game was up for Lowry.

Labour gave him a chance to produce an optimistic new vision for the Festival of Britain, but he just constructed more lines and took the masses out of his work. If he’d taken the buildings out and amplified the people he could have been Beryl Cook. You wonder whether he really hated the working class all along.

However, he is the greatest artist of fin-de-siecle, post-Victorian Britain, the one that drove working people into the well-trodden ground. Quite literally.

I overheard one visitor ask if there’s any green grass up north, to which one well-informed passer-by said, No, just well-trodden earth. I overheard so many who couldn’t come to terms with his white backgrounds, his artistic impression. If only he’d cheered it up a bit he could have been famous.