Those Bastards in their Mansions (Poem by Simon Armitage)

Disused ventilation shaft installed in 1979 in Geevor Tin Mine, Cornwall. Now displayed at Levant Mine by the National Trust (all photos Ian D Smith)

Those Bastards in their Mansions

Those bastards in their mansions:
to hear them shriek, you’d think
I’d poisoned the dogs and vaulted the ditches,
crossed the lawns in stocking feet and threadbare britches,
forced the door of one of the porches, and lifted
the gift of fire from the burning torches,

then given heat and light to streets and houses,
told the people how to ditch their cuffs and shackles,
armed them with the iron from their wrists and ankles.

Those lords and ladies in their palaces and castles,
they’d have me sniffed out by their beagles,
picked at by their eagles, pinned down, grilled
beneath the sun,

Me, I stick to the shadows, carry a gun. 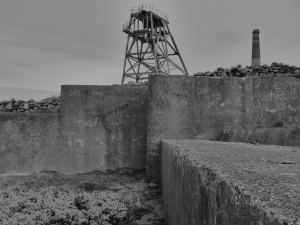 Turning and turning in the widening gyre
The falcon cannot hear the falconer;
Things fall apart; the centre cannot hold;
Mere anarchy is loosed upon the world,
The blood-dimmed tide is loosed, and everywhere
The ceremony of innocence is drowned;
The best lack all conviction, while the worst
Are full of passionate intensity.

Surely some revelation is at hand;
Surely the Second Coming is at hand.
The Second Coming! Hardly are those words out
When a vast image out of Spiritus Mundi
Troubles my sight: a waste of desert sand;
A shape with lion body and the head of a man,
A gaze blank and pitiless as the sun,
Is moving its slow thighs, while all about it
Wind shadows of the indignant desert birds.

The darkness drops again but now I know
That twenty centuries of stony sleep
Were vexed to nightmare by a rocking cradle,
And what rough beast, its hour come round at last,
Slouches towards Bethlehem to be born? 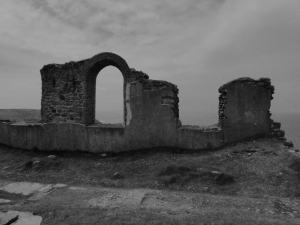 The most unusual thing I ever stole? A snowman.
Midnight. He looked magnificent; a tall, white mute
beneath the winter moon. I wanted him, a mate
with a mind as cold as the slice of ice
within my own brain. I started with the head.

Better off dead than giving in, not taking
what you want. He weighed a ton; his torso,
frozen stiff, hugged to my chest, a fierce chill
piercing my gut. Part of the thrill was knowing
that children would cry in the morning. Life’s tough.

Sometimes I steal things I don’t need. I joy-ride cars
to nowhere, break into houses just to have a look.
I’m a mucky ghost, leave a mess, maybe pinch a camera.
I watch my gloved hand twisting the doorknob.
A stranger’s bedroom. Mirrors. I sigh like this – Aah.

It took some time. Reassembled in the yard,
he didn’t look the same. I took a run
and booted him. Again. Again. My breath ripped out
in rags. It seems daft now. Then I was standing
alone among lumps of snow, sick of the world.

Boredom. Mostly I’m so bored I could eat myself.
One time, I stole a guitar and thought I might
learn to play. I nicked a bust of Shakespeare once,
flogged it, but the snowman was the strangest.
You don’t understand a word I’m saying, do you? 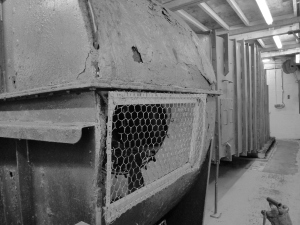 The giant ventilator shaft extracted radon from Geevor mine. Geevor closed in the early 80s with the loss of 900 jobs.

Beyond the darken shadows
Of a cold abandon alley

Lurks the masterpieces kept in time
The city’s homemade gallery.

The city art of the common man
His words and thoughts in design
Expressions shared with quick swipes
Of every curve and line.

Graffiti art so rare and intimate
Unaware of what is shown
Telling the messages of a man’s true life
Drawn proudly on concrete stone.

At glance the drawings on the walls
Seem vulgar, low and unclean
The simple words of the unknown man
The man not heard or seen.

Yet there in his graffiti art he shines
Along with city fellow souls
And their true words and expressed art
Are their dreams, their lives and goals.

So when you pass a covered wall
Filled up with graffiti art
Remember that those are more than filthy wastes
They are the stories from the city’s true heart. 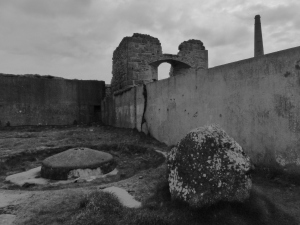 A buddle. A device for concentrating tin ore. In the mid-19th century, these usually took the form of a circular pit with rotating brushes. The tin from the stamps was fed into the centre or side of the pit and graded by gravity, concentrating the heavy ore near the inlet point. These were often mechanically worked.

That took the pipe

That drained the road

I did the levelling.

We made our way

At a steady decline

On the river bank

Where the pipe would cut into the river.

But you should have seen us jump on that fatal day,

When the wall of soil began to break,

And the river flooded in to the trench.

Later, I recounted how I made the mistake.