Noah (Poem on the Theme of Regeneration)

Disused pleasure craft on the Thames at Runnymede, April 21st 2013.

My view is he was trying to walk to Bleaklow

With his boat on his back.

For all anyone knows

But like this: He was sailing on Torside in the last

Of the breeze before the sun dropped,

When stillness set in. He stopped,

Needed to put his boat on the roof-rack.

With no-one round to help—after a cigarette—

He came up with this idea—his best bet—

Of going underneath with a jack,

Lifting his boat onto his back.

He could go neither up nor down,

But out onto the Tintwistle road

With his boat on his back like a cross,

A ghostly shape to the driver who stopped.

But I say he was Glossop’s answer to Noah—

To set his boat

On the kissing stones.

He wanted to save the ‘poor beasts’.

With a spark of an idea that couldn’t fail—

And everyone knows he’d just learned to sail. 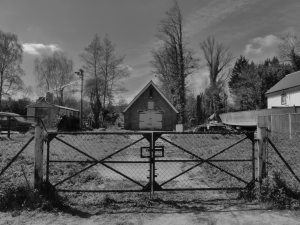 Disused boat house on the Thames at Runnymede, April 21st 2013.