A34 Poems – Regeneration (by John Darwell)

1988-90 The closure of one of Sheffield’s largest steel works and the redevelopment of the surrounding area. Photograph by John Darwell
Commissioned by Untitled Gallery, Sheffield.

Knuckleised by alopecia
And growing hard to employ,
All roads led south for him.
Lo-and-behold, a pot of gold
At the end of the A34
Running on Cheltenham turf-
You can grow a lovely asparagus there.

He chose it for luck, stretching out
Before him like a vapour trail, the A34,
Magic-markered on his old map
But splattered with short-lived cities.
The ancient route south, hard
To follow in places and tough
Keeping sheep together-thirsty work.

Works Unit Only, Relief Road blues.
Tiredness Can Kill. Take a Break!,
Takes a leak in a Little Chef, glad
To be back inside before the engine cools,
Glowing in a lay-by for sandwiches
Leaving a tin-foil nugget.

“Her hair was thick with many a curl
That cluster’d round her head.
She had a rustic, woodland air,
And she was wildly clad.”

Proposed by-pass Newbury-a flash
In the woods and Wordsworth’s children
Wave from a tree-branch
Laughing, cooking under a bender.
He joins them for kidney bean curry,
Returns to his bastardised rattler
That won’t start.

Sink estate. South shore.
He’s grimly learning permanence from the sea
In the seat of a Cortina
Reading the cross-channel ferry
Timetable, grounded. 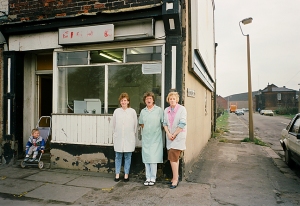