Here is a Land Destroyed

Just back from RHS Flower Show Tatton Park 2012 (just like Chelsea Flower Show but smaller and it’s easier to access the show gardens). A highlight was World Without Torture, a show garden designed by son and mother team, Howard and Dori Miller for Q-CAT Quaker Concern for the Abolition of Torture.

Howard and Dori say “We want visitors to enjoy the garden and enter into a deeper awareness of the need to end torture”. It certainly worked for me. The Wirral and Chester Quaker’s newsletter from February 2012 stated “The design for ‘World without Torture’ seeks to raise understanding and awareness of Q-CAT’s concern in the following ways: 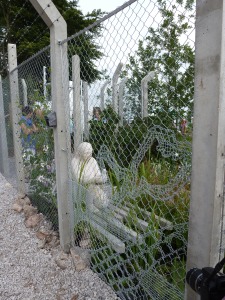 This photo from the outside looking in shows the high security fencing with dove lacing. From the newsletter: “High security fencing, prison gates and a cell, to give visitors some of the feelings associated with imprisonment and torture. The same concrete posts are then used as hard landscaping, so that they are trodden underfoot. This implies Q-CAT’s desire that torture can be overcome. The sculpture is of a dove in the process of being released. The theme is developed by further doves, depicted on the chain link fence in wire embroidery, the whole to symbolise Q-CAT’s role in helping to bring about freedom from torture.” 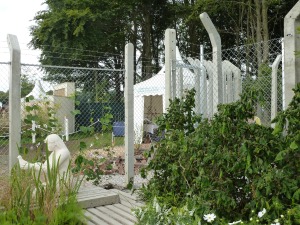 Photo taken from within the show garden showing the sculpture and the planting, or “ecological succession”. From the newsletter: “Ecological succession – this is the natural plant colonisation of land devastated by bombing. Bombing and torture have the same end in mind – to deliberately damage and destroy. The ecological succession gives a hopeful message, that in time, land will heal itself. The use of white varieties of plants to emphasise the peace and purity of a world without torture.” 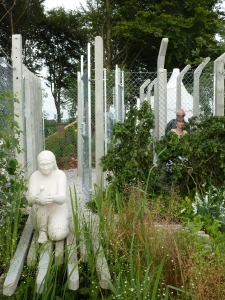 The sculpture is of a figure releasing a dove. Judy Greaves is the sculptor. From the RHS media centre: “Quakers
The Religious Society of Friends (Quakers) originated in England during the Commonwealth years (1649 – 1660). They were persecuted and often imprisoned by both Cromwell and Charles II but responded by organising the first parliamentary lobbies calling for toleration, respect for trial by jury and better prison conditions.” 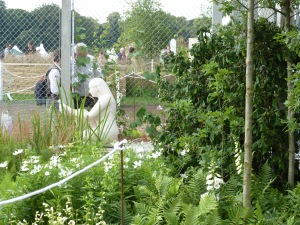 When I first saw the garden, I thought it was an electricity sub-station, but the brutal wire and concrete ‘prison’ became more obvious, and I wanted to take the journey back out. Somehow, I already felt imprisoned. It’s hard to capture the effect here. There were many people around queuing to enter, and I had to hurry my snaps. It was impossible to capture the recordings played within the ‘cell’ and to show the effect they had. From the World Without Torture leaflet:
“Here is a Land Destroyed …
But land can heal.
The tortured mind can heal.”