Popped into the village of Tolpuddle on the way home from Dorset where Caroline took this photo outside the Tolpuddle Martyrs’ museum. 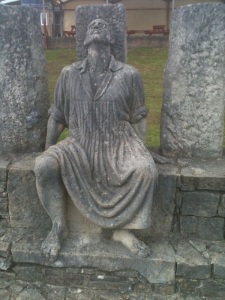 It’s a statue of George Loveless, one of the Tolpuddle Martyrs by Thompson Dagnall.

From the website “His (Dagnall’s] design marks the time when George Loveless is in Dorchester Prison but is so ill his warders fear for his life if he is transported. So he is held behind for a few weeks to recover whilst his five fellow Martyrs are put aboard the hulks before being shipped to Australia.”

“As the sun rose on 24th February 1834, Dorset farm labourer George Loveless set off to work, saying goodbye to his wife Betsy and their three children. They were not to meet alone again for three years, for as he left his cottage in the rural village of Tolpuddle, the 37-year-old was served with a warrant for his arrest.”

“Loveless and five fellow workers – his brother James, James Hammett, James Brine, Thomas Standfield and Thomas’s son John – were charged with having taken an illegal oath. But their real crime in the eyes of the establishment was to have formed a trade union to protest about their meagre pay of six shillings a week – the equivalent of 30p in today’s money and the third wage cut in as many years.” – Tolpuddle Martyrs’ website.

Just a little bit about the continuing history of cuts, austerity and the trade union movement.