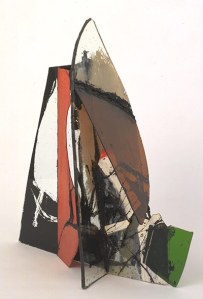 The Peter Lanyon (1918 – 1964) exhibition at Tate St Ives reveals an artist whose daring abstract expressionism must have seemed light work to him compared with fighting Nazis.  It’s an extraordinary blast of anger against post-war mind control. Most relevant for twenty-first century Britain is Lanyon’s Lost Mine. This is a glass model construction for it. He was commercially successful as well as being a daredevil in art as well as in life, and that must have peeved the establishment. His son, Andrew, is a damned fine artist too. I just added an external link to his website on his father’s Wiki page. Why wasn’t it there?

Check Artnet to see the Lanyons coming out of the private collections now that Britain has caught up with his genius. You might need the odd million.

Lanyon’s work has never received the attention of Nicholson and Hepworth. Although he worked in Italy and Texas, he never went global. But that’s not the problem. The St Ives School seems to be commonly regarded as irrelevant in a way that makes me want to piss up the walls of Tate St Ives every time I visit.

See St Ives Artists: A Companion by Virginia Button, (Tate, of course) a fine book except that it seems to be too quick to categorise, collate and ultimately reduce. But then Virginia is an incomer. Here, the great Alfred Wallis is categorised as “primitive” or “naive”, when he was the most assured, sophisticated and fully developed artist. These derogatory terms come from fear. Critics have to regard anything provincial as dim. The St Ives School, to this day, presents probably the only viable, strong and developed regional threat to the art hegemony. That’s why Tate built Tate St Ives, an outpost constructed so that ruling incomers can keep the natives subdued by constantly telling them they’re irrelevant. It even looks like Caernarvon castle in Wales. You see, London’s been doing this sort of thing for years.